No education without language. And no language without education.

We support citizens from all cultural and social backgrounds in expressing themselves and keeping an open mind with regard to the opinions of others. We proceed on the assumption that ‘successful’ education is that which broadens the horizon and gives inspiration to develop one’s own capabilities. Limits become tangible when they are experienced through the words of Socrates: “I know that I know nothing”. And they may be overcome when „a light comes on”, when a correlation becomes apparent and a meaning perceptible; or, when one realizes that others have similar experiences, thus enabling isolation to be overcome. And it doesn’t stop there. We assume learning is creative: language may not only be ‘detected’, but also ‘invented’. An internal as well as an external reality may be expressed, discovered and simultaneously created through work with collages, body-language – via facial expression and gestures, expressive drama, narration, wordplay, attempts at writing, exercises in communication, dance and other verbal resources.

This creative form of education, one of ‘self-education’, is not to be mistaken for scholastic learning, in which content is often ‘injected’, rather than acquired, and where the pressure to achieve may detract from the pleasure of learning. We would far rather contribute to a situation in which citizens trust their own perceptions, overcome their fear of themselves and others, be capable of independent thinking, approach problems reasonably and with phantasy, whilst realizing that they are life-long learners.

Learning and personal growth take place as interaction with the world. 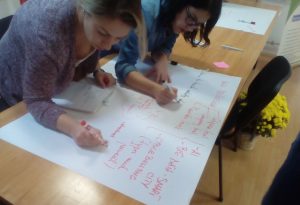 “Turning as much of the world as possible into one’s own person is life in the higher sense of the word.” It was thus that Wilhelm von Humboldt once expressed his educational ideal, our guiding motto. And it is for this very reason that the world deserves our interest, it being a formative influence on each and every one of us, be it on a small or large scale. The world provides – or thwarts – opportunities, generates atmosphere, shapes thought, feeling and action, establishes the framework within which human action and aspiration emerge. We set ourselves the task of making this framework comprehensible so as to grasp how structures and “relationships” influence the development of human beings – and how, conversely, society can be shaped, “educated” by members of civil society.

Education is political and weltgewandt offers political education. We provide inspiration that can assist in rendering the numerous aspects of political life comprehensible, thus enabling members of the public to find their bearings in a complex and crisis-ridden world, learn from history and be able to make one’s own voice heard. In addition, we stimulate the nurturing of curiosity and empathy, a tolerance of contradictions and ambiguities, the cultivation of a democratic attitude; we also encourage citizens to participate in the humanist foundations of the community from a discerning and responsible approach.

Our societies are diverse; they comprise people from different social groups, lifestyles, cultures, religions, moral concepts and political stances. All of them maintain their varying cultures of coexistence, lifestyle, preferences and dislikes, habits and interests. weltgewandt facilitates intercultural exchange, the exploration of others, and the reaching of a common understanding of both similarities as well as disparities – here in Germany, Europe and all over the world.

As being weltgewandt („cosmopolite“ or „open to the world“) we characterise an interested and confident person at home in various worlds, one who is able to establish contextual links knowledgeably and who perceives dignity in the “face of the other” (Lévinas), as is bestowed on every human being.

EVERYONE is capable of cultivating foresight, language skill and a community spirit. Through intercultural, civic and political education.